Italian 3D printing company Wasp has unveiled a new printer designed for concrete mortar extrusion. Having previously created printers designed to work with polymer/plastic, clay and massive mortar printers designed for structures, the new Delta Wasp 3MT can be used in industrial applications to produce smaller, concrete items. In addition to their line of printers, Wasp also produces a concrete replacement material called Gaia, a natural mortar made from rice waste and earth.

According to Wasp, the 3MT's precision, repeatability and accuracy will aid users in creating complicated geometric designs. By replacing the time it takes for a concrete mold to be constructed before producing the piece itself, this new technology allows columns, stairs and concrete blocks to be completed far more quickly and affordably than by using traditional methods. 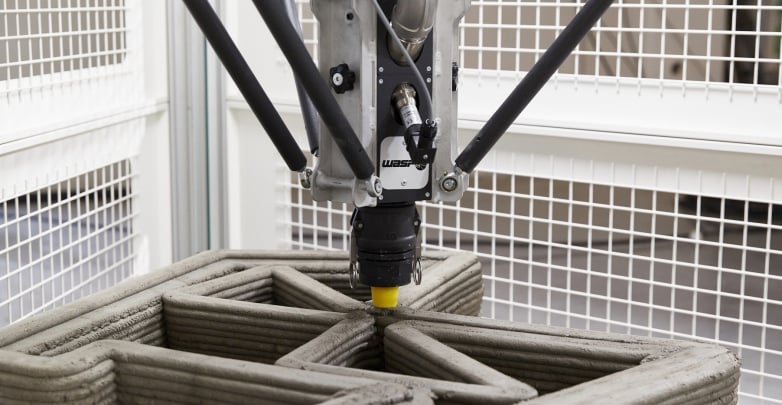 The new printer comes with two nozzle sizes, designed to work for finer prints as well as larger ones. In contrast to printers used for polymers, the 3MT only needs to achieve a temperature of up to 30℃, and does not have a heated bed.

The printer's frame is made from steel with aluminum covers, while the driven components include stepper motors that are used to drive steel core belts. The extruder itself is suspended on a three-link system, moving with precision on aluminum rail sliders and nylon wheels. Wasp's new 3D printer can be used with Windows, Mac, and Linux, and accepts files such as .stl, .obj, and g-code. The printer also comes with a license for Simplify3D software.

Powered with a 220/240v 50/60 Hz circuit, the 3MT utilizes a novel wireless control module to communicate with it's 32-bit board, allowing the printer operator to monitor prints via webcam and control the machine remotely.

In addition, Wasp's new offering also features a built-in touchscreen interface that allows users to control the printer and receive g-code through pendrive USB. The machine uses a 2200w motor pump to draw from an 80L tank that feeds material into the printer at 250L/h.

In the event of power outages or a need for pausing the print job, the printer offers a “resurrection” feature. The 3MT also uses a “free Z” system, allowing the print to be resumed at any layer that fails.

Wasp's latest offering is CE certified and compatible with industry 4.0. While 3D printers can often be loud, the new printer uses acoustic insulation paneling to reduce noise. To ease integration, the printer can be easily moved by forklift. Wasp offers remote assistance and diagnostics with the purchase of one of their printers. The printer is shipped and arrives disassembled and can be delivered within 10 weeks upon purchase. Visit Wasp's website for more information about the 3MT, in addition to the crane wasp printer for architectural builds and the company's other offerings in sustainable construction.